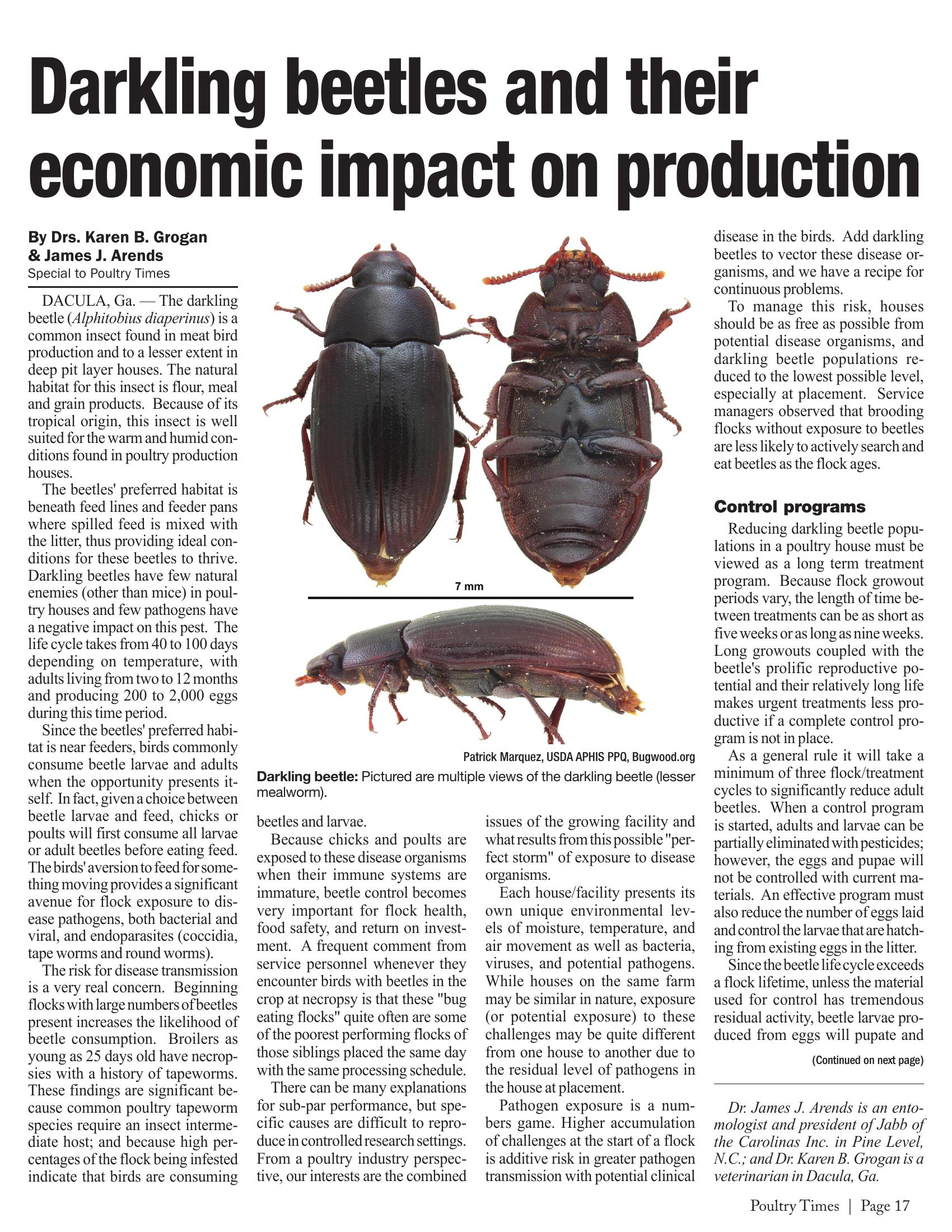 DACULA, Ga. — The darkling beetle (Alphitobius diaperinus) is a common insect found in meat bird production and to a lesser extent in deep pit layer houses. The natural habitat for this insect is flour, meal and grain products. Because of its tropical origin, this insect is well suited for the warm and humid conditions found in poultry production houses.

The beetles' preferred habitat is beneath feed lines and feeder pans where spilled feed is mixed with the litter, thus providing ideal conditions for these beetles to thrive. Darkling beetles have few natural enemies (other than mice) in poultry houses and few pathogens have a negative impact on this pest. The life cycle takes from 40 to 100 days depending on temperature, with adults living from two to 12 months and producing 200 to 2,000 eggs during this time period.

Since the beetles' preferred habitat is near feeders, birds commonly consume beetle larvae and adults when the opportunity presents itself. In fact, given a choice between beetle larvae and feed, chicks or poults will first consume all larvae or adult beetles before eating feed. The birds' aversion to feed for something moving provides a significant avenue for flock exposure to disease pathogens, both bacterial and viral, and endoparasites (coccidia, tape worms and round worms).

The risk for disease transmission is a very real concern. Beginning flocks with large numbers of beetles present increases the likelihood of beetle consumption. Broilers as young as 25 days old have necropsies with a history of tapeworms. These findings are significant because common poultry tapeworm species require an insect intermediate host; and because high percentages of the flock being infested indicate that birds are consuming beetles and larvae.

Because chicks and poults are exposed to these disease organisms when their immune systems are immature, beetle control becomes very important for flock health, food safety, and return on investment. A frequent comment from service personnel whenever they encounter birds with beetles in the crop at necropsy is that these "bug eating flocks" quite often are some of the poorest performing flocks of those siblings placed the same day with the same processing schedule.

There can be many explanations for sub-par performance, but specific causes are difficult to reproduce in controlled research settings. From a poultry industry perspective, our interests are the combined issues of the growing facility and what results from this possible "perfect storm" of exposure to disease organisms.

Each house/facility presents its own unique environmental levels of moisture, temperature, and air movement as well as bacteria, viruses, and potential pathogens. While houses on the same farm may be similar in nature, exposure (or potential exposure) to these challenges may be quite different from one house to another due to the residual level of pathogens in the house at placement.

Pathogen exposure is a numbers game. Higher accumulation of challenges at the start of a flock is additive risk in greater pathogen transmission with potential clinical disease in the birds. Add darkling beetles to vector these disease organisms, and we have a recipe for continuous problems.

To manage this risk, houses should be as free as possible from potential disease organisms, and darkling beetle populations reduced to the lowest possible level, especially at placement. Service managers observed that brooding flocks without exposure to beetles are less likely to actively search and eat beetles as the flock ages.

Reducing darkling beetle populations in a poultry house must be viewed as a long term treatment program. Because flock growout periods vary, the length of time between treatments can be as short as five weeks or as long as nine weeks. Long growouts coupled with the beetle's prolific reproductive potential and their relatively long life makes urgent treatments less productive if a complete control program is not in place.

As a general rule it will take a minimum of three flock/treatment cycles to significantly reduce adult beetles. When a control program is started, adults and larvae can be partially eliminated with pesticides; however, the eggs and pupae will not be controlled with current materials. An effective program must also reduce the number of eggs laid and control the larvae that are hatching from existing eggs in the litter.

Since the beetle life cycle exceeds a flock lifetime, unless the material used for control has tremendous residual activity, beetle larvae produced from eggs will pupate and

emerge in the next flock after the insecticide is gone and those beetles will continue to lay more eggs. To reduce the level of beetles in this "hold over population", repeated flock treatments are needed.

To determine the economic benefit of effective darkling beetle control, a three year study was initiated comparing an existing program with a proposed biological control method. The accepted standard program consisted of treatment prior to birds being placed, using: Rabon®, Sevin ® or permethrin. These treatments were used prior to every flock placement at five to six times a year and were implemented on a three house broiler farm (thus, 15 separate flocks).

Litter was treated three to six days prior to each new flock placement. Beetles were monitored using grab samples and visual evaluations of the houses to insure the population was being reduced. Control in the houses receiving the existing standard treatment was considered "marginal," beetles were able to be seen easily. The new biological control agent provided "good" control of beetles and beetles were difficult to find. These were center brood houses, using half house brooding for the first seven days, opening the rest of the house as bird growth required.

Those values were compared with all farms sending birds to slaughter in the same week and are summarized on a per 100,000 bird basis:

While this ignores other feed ingredient costs, the differences between the houses receiving good versus marginal control clearly illustrate an associated cost when beetles are not effectively controlled.

The value of a good beetle control program in this limited view ranged from $2,649.90 to $4,262.90 per 100,000, depending on the corn cost of the diet ($2 to $4.50 per bushel). (It is obviously much higher since all ingredients have increased dramatically from when this study was conducted and improvements in marketable product are not considered.)

Another means to establish an economic value could be placed on the known value of feed efficiency. The cost of feed to produce a pound of poultry is often calculated for each flock allowing for different feed consumption patterns.

Reducing beetle populations to low levels at placement, when beetles are difficult to find, reduces the birds' exposure to house pathogens. While many of these pathogens do not present themselves as clinical diseases, the combination of them may contribute to a weakened immune response, harm feed conversion and lower overall flock performance.

Even though this performance decrease is small and difficult to measure on an individual bird basis, when measured on the flock level, it represents a significant production loss and dollar loss. As seen in this three year study, the investment in a good beetle control program can have a dramatic return to the grower, putting anywhere from $2,649 to $4,262 per 100,000 birds back into their pocket.

Perhaps more importantly, there are many issues in a poultry house and its production cycle that cannot be absolutely controlled. Growers can reduce darkling beetle numbers and lessen the impact of one area of production that presents itself as a problem.

Editor's note: Due to readership interest, this article is being reprinted from an older issue of Poultry Times.

Dr. James J. Arends is an entomologist and president of Jabb of the Carolinas Inc. in Pine Level, N.C.; and Dr. Karen B. Grogan is a veterinarian in Dacula, Ga.